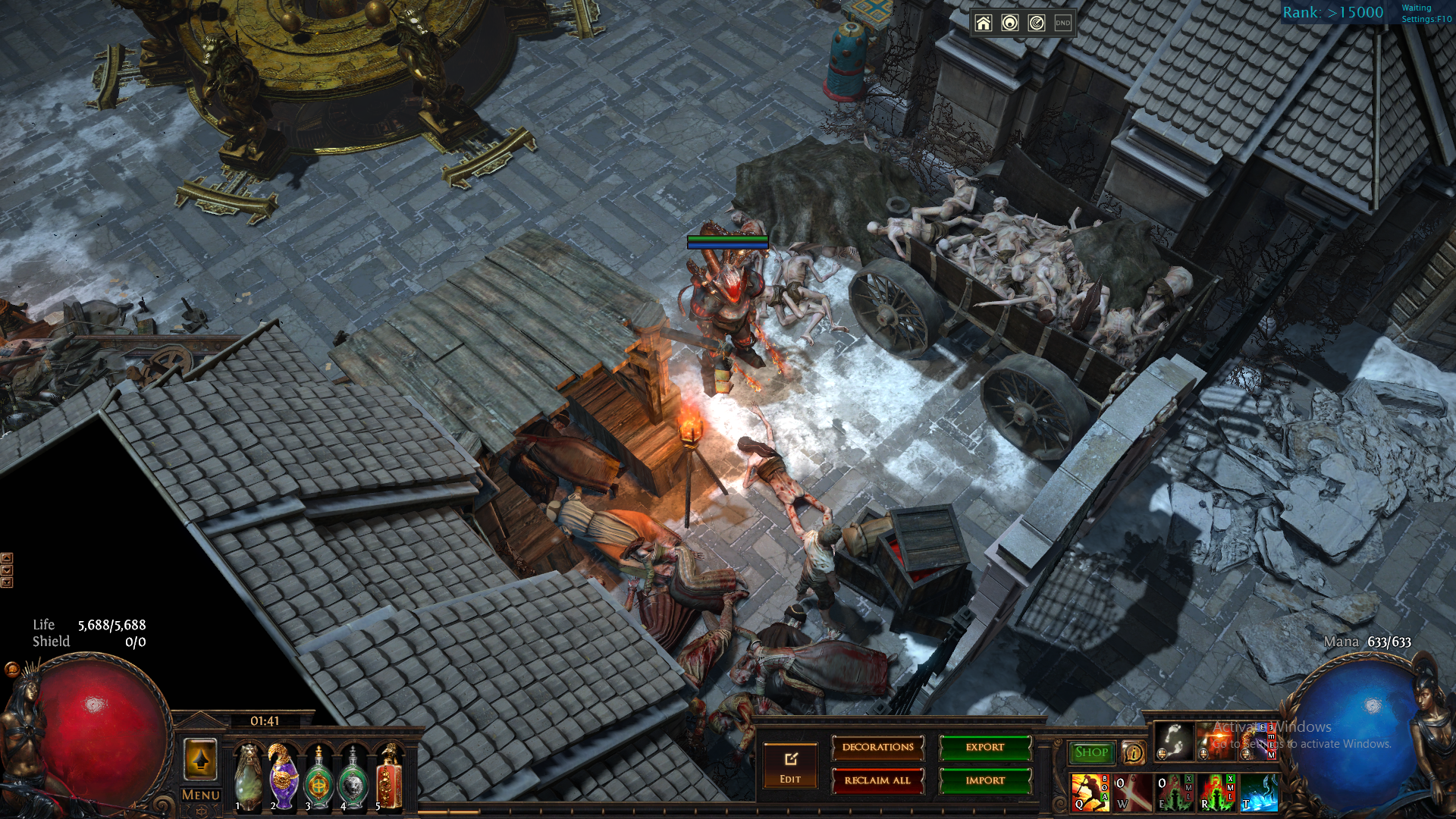 This hideout invites you to take a small glimpse into immediate post-Kitava future of Oriath.

Ravaged by the clash of deities, once orderly land descended into anarchy. With previous administration dead or missing, and surviving population being occupied with day-to-day survival among the ruins of a once glorious city, Oriath quickly saw an unopposed influx of exiles from Wraeclast. Despite the fact that majority of ex-exiles (sic!) was willing to forget their misery in Wraeclast and move on with their lives, a big portion of them had way too big of a grudge against Oriath citizens to simply forgive it. And while their immediate judges and prosecutors were among the first to perish in the initial uprising and catastrophe that followed, the silent agreement of Oriathan people to turn their collective blind eye on hundreds of obviously unjust trials made every living free citizen of Oriath a prime subject for retribution.

When you first spawn in this hideout, you end up in a small room of mediocre wealth. I treat this room as a personal room of player's character with access to legacy workbenches from previous leagues. I consider switching the interior of this room to one of a treasury, but for now, I'm quite satisfied with it.

The red carpet will take you to the main NPC room, containing most of the NPC I usually interact with, each having their stylized workplace (though I will change the bookshelf behind Jun to an investigation board once I unlock it).

For now we will avoid exiting the building and follow the carpet to the Library, where we will meet Navali in her workspace, stylized to be spooky and vaalish, and Einhar, surrounded by remains of dead animals (is anyone really surprised at this point?). The lonely exile with his modest belongings suggests that the actual living space of the courthouse is quite limited.

If we follow the red carpet further, we will enter the pretty unremarkable (although, rather wealthy) corridor, which will take us to our main point of interest - the courtroom. The centerpiece of this room is a shoddy, obviously custom-made cage with a single inmate, which is being questioned by a group of exiles. By the looks of it (the furniture in the cage, a basket with food and quite some paperwork in the vicinity) he has a lot of explanations to do.

Right next to the courtroom, behind a flimsy bookshelf-for-a-wall construction, lies the improvised (but still effective) torture chamber, with both executor and oriathan citizen present. There is a silent body on the floor, covered in blood. His screams just recently could clearly be heard in the courtroom - at this point, the flimsy design of the torture chamber suddenly appears to be clearly planned for this.

At the other end of the courtroom, we can clearly see makeshift prison cell, containing a handful of oriathan citizens as prisoners, two exiles (wardens), and suddenly - a well-served dining table. Apart from simply being the only room capable comfortably fitting such a table, fine dining in presence of severely distressed prisoners must have a serious psychological effect on them - Wraeclast survivors truly are experts in every shade of human misery.

Upon exiting the courtroom and following the aforementioned main corridor, we will pass :

- makeshift bunk beds for housing those, who will be unable to live outside in the tents due to health conditions.

At this point we have finished exploring (and, hopefully, admiring) the courthouse's interior and we are ready to step outside.

In the main square we will see the elaborate portal device in the middle of it, with corners of the square being occupied with:

- General stockpile and logistics department of the whole endeavor.

- Shanty tent town for those, who could not find living place inside.

And just as we are ready to leave this place the way we entered (through the waypoint), our eye catches a covered up pile of irregular form. Closer inspection reveals horrifying truth - those are multiple naked dead bodies, ready to be transported out. And just to add one last grim detail to this picture - we watch the undertaker stripping dead oriathans of their belongings and carefully placing them in the conveniently placed boxes.

Looks like even after autocracy fell, justice did not return to the courthouses.

I hope you liked the fruit of my labor. It was a lot of fun working on this project, and I believe it ended up suiting the dark and malevolent lore of Path of Exile quite nicely.

While I fully realize that the subject of unjust trials, the death penalty, and slight hints on national discrimination and concentration camps are all pretty touchy subjects, I still went ahead with it and I sincerely hope that nobody is significantly offended or unnerved.

I hope that my English was not too bad - I live in Ukraine, and English is not my native language.

Looks like the screenshots will be loading in random order, so they might not reflect the journey correctly, despite that being the original plan. In this case, I hope it won't a big trouble for you to understand in which order those are described in this text. If everything else fails - just download it and enjoy it directly!

Contains microtransactions. Despite being primarily a creative and artistic design, it's still very functional - stash is right next to a vendor, all NPCs and map device are reasonably concentrated - literally 3-4 Leap Slams apart, so the usual grind is not interfered by pesky cosmetics :D