The ultimate guide to Path of Exile Hideouts

Hideouts are instanced areas players design for themselves. Initially hideouts didn't have nearly the amazing amount of customization we see today but at the time of release having your own home was still a really cool feeling!

One of the best parts about hideouts is the crazy amount of customization they allow. You can really pour your heart and soul into creating a truly amazing hideout. With thousands of decorations and multiple unlockable hideout locations, the possibilities are endless.

After finishing the story and getting to the end-game, your personal hideout will serve as your main base for almost all of the end game content. Just about everything can be accessed from within your hideout, such as end-game maps, the crafting bench, most masters as well as personal and guild stashes. It is also the most common area for players to trade items.

How do I unlock my own hideout?

You only have to unlock your hideout the first time you play through the story in Path of Exile. If it is your first playthrough, you will have to enter the Chambers of Sins and rescue Helena during Act II. Once you rescue Helena she will reward you by allowing you to select a hideout.

Helena is the main master when it comes to anything hideout related. Once you unlock additional hideouts, she will be the master you need to speak with to swap them. Once you have your hideout unlocked, you can add Helena and all of the other masters to your hideout. Having all of the masters in your hideout is really convenient.

How do I visit other player's hideouts?

Your hideout isn't an isolated place that other players will never see. If you trade with another player, it is customary for the buyer to visit the seller's hideout to pick up the item. If you happen to the be seller, the buyer will visit your hideout and see all of your hard work!
To visit a party member or friends hideout, right-click on their in-game portrait frame and select the option "Visit Hideout" 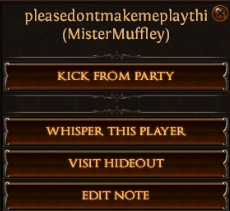 How many different hideout tilesets are there?

Currently, there are over sixteen in-game unlockable hideouts in Path of Exile. There are also a few more hideout tilesets that can be purchased in the Path of Exile shop. Some hideouts are unlocks that can only be unlocked by being found in certain areas. The chance of a map having the hideout you would like to unlock varies based on the hideout you are trying to unlock. Some hideouts are very rare while others are relatively common.

When you do run across a hideout in-game the entrance to the hideout will be marked with a blue fleur-de-lis on your map. Once you enter the hideout and kill all of the monsters inside it will automatically unlock that hideout tileset for you. That hideout is now unlocked forever, across all leagues and difficulties. 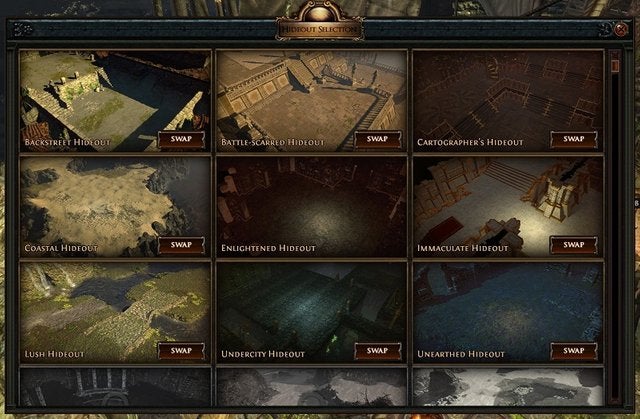 The list below shows the current hideouts and how to acquire them:

Rare hideouts are usually found while running high tier maps. Common tilesets can usually be found while leveling or completing the main story.
We do not have any official numbers regarding hideout spawn rates. The community has found that "Common" hideouts either spawn every time or almost every time in their listed zone.

As for "Rare" hideouts, these can sometimes take hundreds of runs before being found. We do know that spawn rates differ between rare hideouts, some spawn more frequently than others.

I recommend joining the Hideout Showcase Discord and the Path of Exile Hideout Discord to work with other players when searching for rare hideouts. When one player finds a hideout in-game they can then invite other players into their game and share that hideout with them by clearing it out together.

Note: Even after you have cleared all of the monsters inside a hideout, other players can still come in afterwards to unlock it.

Where do I get decorations for my hideout?

Decorations are the key to making any hideout look amazing. Decorations can be purchased from any of the masters in your hideout using Favour. You can purchase the same decoration multiple times. This allows you to place the same decoration in many places throughout your hideout.
Favour is an account wide currency that crosses all leagues and game modes. (Hardcore, Softcore, Ladder, Non-Ladder etc.) Favour is gained by either completing Master Missions or Atlas Objectives. 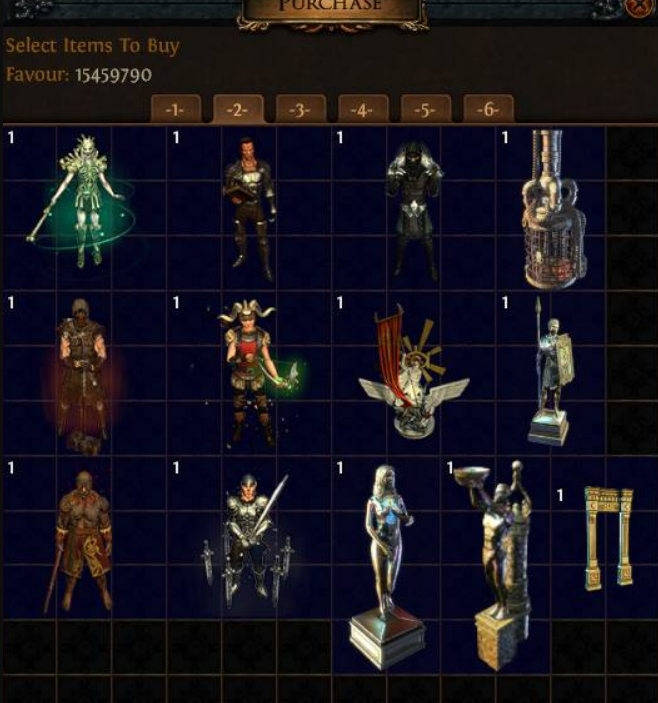 How can I reclaim decorations?

If you would like to re-use a decoration placed in your Hideout, you can do so by going into your decorations tab and selecting the "Reclaim" option. This removes the decoration from your hideout and returns it to your inventory to be placed again.

Hideouts allow players to express themselves in wondrous and amazing ways. Players can also export these amazing hideouts using the import/export feature. This feature allowed sites like

https://hideoutshowcase.com to be born, places where users can share their hideout with the world. With a little imagination and a stockpile of decorations, the sky is the limit for what you can create.

Experienced hideout creators can create hideouts you would never think were possible. They can overlay decorations, adjust lighting, or create new textures by placing decorations close together or inside one another.

Hideouts have become a core part of Path of Exile. Your hideout is where you access almost all of the end-game content. They are used to run maps, store items, trade with other players, interact with masters and so much more.

Your hideout is not only a critical part of your Path of Exile success, it is also a wonderful outlet for your own creativity. Due to spending so much time in your hideout, you will probably want to customize it and make the place look awesome. This will allow you to show it off to friends and buyers when making trades.

I hope you have fun working on your own hideout and also try importing some of the user-submitted hideouts here at https://hideoutshowcase.com. Many of the hideouts on this site required hours of work by the creators and look amazing!