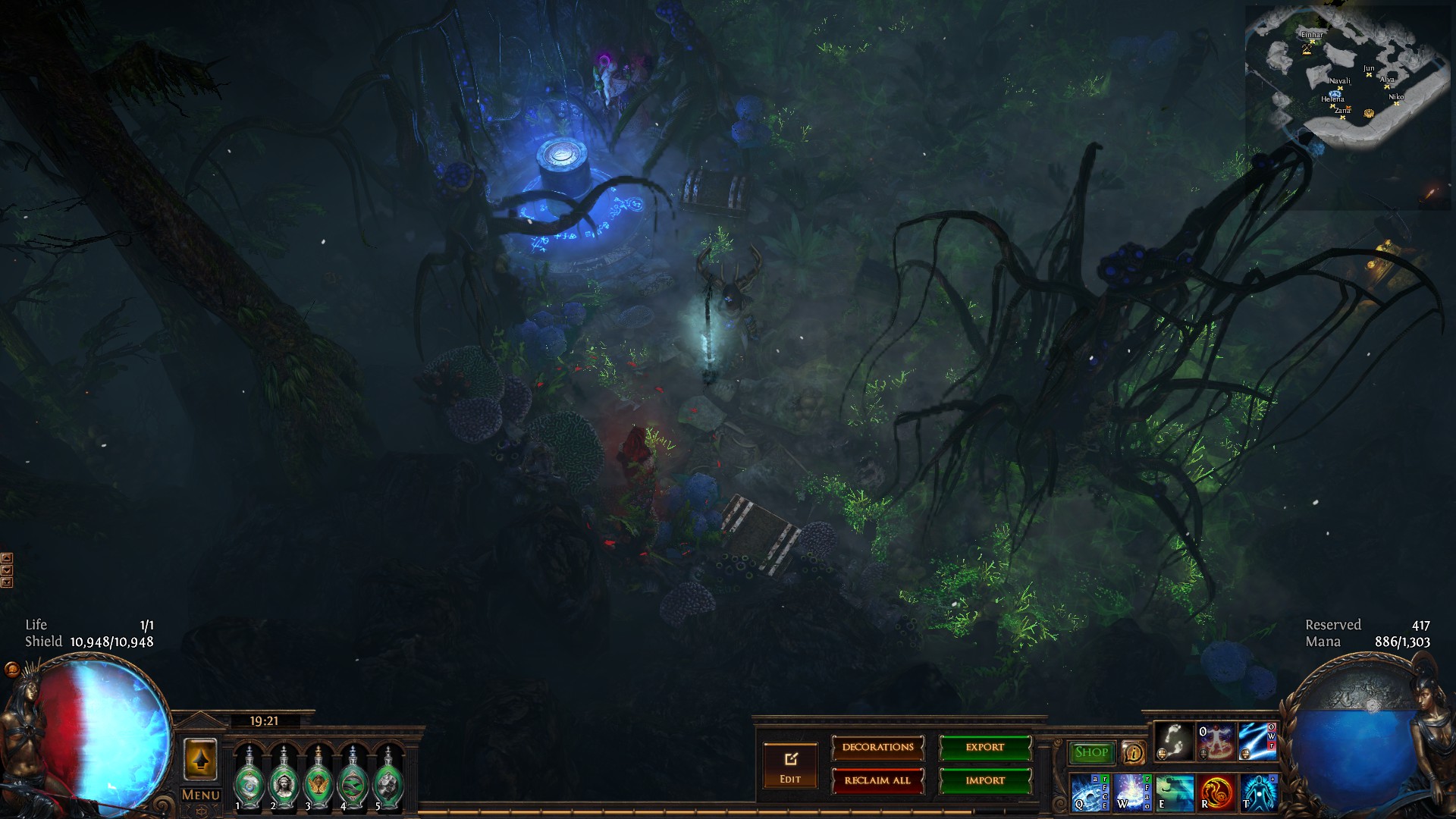 Virakhu, Glade of the Occult "Enter the forbidden Glade, and embrace the strange, the unnatural.

Among the frozen bones of Nightmare, the dreams of life take form."

Hidden deep within the icy crevasses above Highgate lies a peculiar glade. The Maraketh call it the Virakhu, the Precipice, a forbidden entrance to the eternal depths of Wraeclast. Here the bitter mountain winds converge with the warm humidity rising from the abyss below, breeding a delicate fusion of northern rainforest and subterranean grove atop the blackened spire of rock piercing the glacier floor. The air reeks of the fetid cycle of life and decay, as pine, fir, root and fungi vie for dominance. The absence of light is forgotten among the fluorescent patches of moss casting an eerie verdant glow upon the mists. There are no birds. There are no beasts. Death lingers like a cold scythe at the end of summer, waiting to reap a crop long overdue. But the roots cling tighter and delve deeper, drawing strength from the immortal ones lurking below, and the fireflies dance in the mists as silent sentinels against the darkness. It is the bridge between Wraeclast and what lies beneath, a nexus of thaumaturgy and powers far older than Nightmare.

In her days after Kitava's fall, the exiled Witch hunted ceaselessly for a sanctuary. Wraeclast knew her as the very spirit of vengeance, the slayer of Gods, the Liberator of Oriath. All praised her name and her courage, yet fear shadowed any attempt at true belonging. Intrigued by the echoing death throes of the Beast, she wandered, until one day she came upon a broken, winding trail very near to Tevarus' Resonator. It reeked of mystery, twisting and spiraling down the fissure. A cold comforting darkness embraced her as she descended, until finally she emerged into the Glade. A shiver of excitement pierced her veils of apathy. The air hummed with the complex weave of arcana and the teeming glow of improbable life, whispering to her by names only she knew. The mists clung to frostclad robes as if alive, measuring the Witch's will and finding it worthy. For the first time in her life, she beheld a mirror clearer than Kalandra's finest craft. She was home.

This hideout is my first earnest attempt at creating a thematic home for a character. After the success of my Cold Occultist this league, I wanted a suitable, unique hideout for her. The Glacial layout was an obvious choice, but I wanted to do more with it than just snowclad ruins. So I began testing, first with the vivid green moss found in the Dungeon tileset, then with the Coastal rocks. A picture in my mind began to form, and this was its realization.

Sadly, I cannot find a way to include the rest of the hideout in this design. I deliberately crafted this theme around the absence of snow. Even an inch left or right exposes the snowy rocks and the jarring black tops of the ridgelines, so I chose to sacrifice space for aesthetic. Besides, I always prefer compact, ergonomic hideouts compared to sprawling ones with the map device and waypoint a good walk apart from each other. The stash, map device, masters and crafting bench are all quickly accessed.

A word of warning: Jun cannot spawn her portals anywhere in the hideout. Her ridiculous need for a football field of space around her is just not possible to satisfy given the constraints of the rocks and the dozens of decorations covering the floor. If you can find a place for her that works, I salute you. Otherwise you'll need to load a different hideout or spawn her in maps.